Polybrominated diphenyl ethers (PBDEs) are brominated flame retardants used in manufactured materials. PBDEs were never manufactured in Canada and are no longer used but were historically imported in finished products such as furniture, electronics, and vehicles. The total historical production of all PBDEs from 1970 to 2005 has been estimated at between 1.3 and 1.5 million tonnes.1

PBDEs can be classified by the number of bromine atoms they contain. Octa and deca-BDEs (eight and 10 bromine atoms, respectively) are mostly found in plastics and electronic housings, while penta-BDEs (five bromine atoms) are used primarily in polyurethane foams and textiles.2 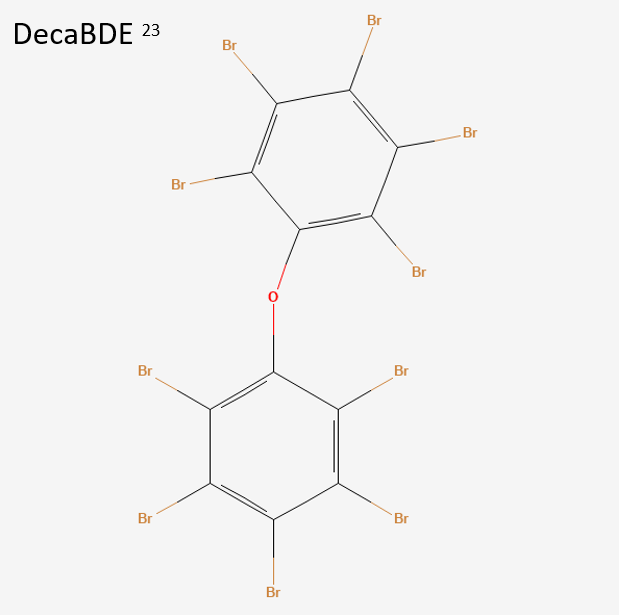 FACT: Although there are 209 different PBDE congeners, just one – BDE-209, contributes to ~ 80% of the total PBDEs found in sediment from the Strait of Georgia.4 This form of the chemical is unstable and can break down in a way that makes it easier to move into aquatic food webs.

PBDEs have been detected in municipal wastewater discharges in the Lower Mainland and Okanagan.5 PBDEs can also travel long distances through the atmosphere, and recent studies indicate that non-North American sources make significant contributions of PBDEs to coastal British Columbia air.6 PBDEs are persistent and bioaccumulate in marine food webs 7, though decreases in PBDE levels have been documented in both seabird and marine mammal tissues since restrictions on use, sale, and import of PBDEs were implemented in Canada.8,9

Brominated flame retardants are known to have toxic effects in terrestrial and aquatic organisms. PBDEs can disrupt hormones, and exposure can lead to long-term developmental effects on neurological, reproductive, and immune systems.3 The most widely used chemical in this group, deca-BDE, is also suspected to cause cancer.

PBDEs biomagnify (increase in concentration) in food webs, exposing high trophic level species to levels that may cause health effects.10 In mammals, PBDEs can also be transferred from mother to young via the placenta 11,12 and via lactation 13,14, creating an exposure route for developing young. In harbour seals, PBDEs were found to impact thyroid hormone expression as well as the immune system.15

In Canada, regulations implemented in 2008 prohibited the manufacture of all PBDEs and restricted the use and sale of penta-BDE in commercial mixtures.5 As of 2016, prohibitions on use and sale were extended to all PBDEs (including deca-BDE) and products containing them, except manufactured items.16

Penta and octa-BDEs were banned by the European Union (EU) in 2004 and have been listed as persistent organic pollutants (POPs) under the Stockholm Convention. Deca-BDE is the most widely used PBDE globally and is still produced in the United States and Europe. 3 The EU announced plans to regulate deca-BDE beginning in March 2019, with deca-BDE products produced prior to this being exempt.17

Canadian Federal Environmental Quality Guidelines (FEQGs) have been developed for PBDEs for water (protective of aquatic life), sediment (protective of sediment-dwelling organisms and pelagic animals that bioaccumulate PBDEs from sediment), fish tissue (protective of fish), wildlife diet (protective of mammals), and bird eggs (protective of birds). FEQGs are based on different PBDE groupings, rather than total PBDE concentrations (Table 1).

8 Miller A, Elliott JE, Elliott KH, Guigueno MF, Wilson LK, Lee S, Idrissi A. 2015. Brominated flame retardant trends in aquatic birds from the Salish Sea region of the west coast of North America, including a mini-review of recent trends in marine and estuarine birds. Science of the Total Environment 502: 60-69.

17 Official Journal of the European Union. 2017. Commission Regulation (EU) 2017/227. Amending Annex XVII to Regulation (EC) No 1907/2006 of the European Parliament and of the Council concerning the Registration, Evaluation, Authorisation and Restriction of Chemicals (REACH) as regards bis(pentabromophenyl)ether. Available at: http://eur-lex.europa.eu/legal-content/EN/TXT/PDF/?uri=CELEX:32017R0227&from=EN