Mercury is found in the Earth’s crust predominantly in the form of mercuric sulphide (cinnabar). It can enter the environment through both natural and anthropogenic sources.  Natural sources include forest fires and volcanoes, while major anthropogenic sources include coal burning, metals smelting, gold and silver mining, and chlor-alkali production (the production of chlorine and sodium hydroxide).1 In addition, mercury that has been deposited in the past can be re-emitted into the atmosphere. 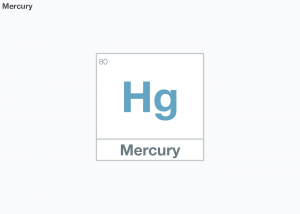 In Canada, chlor-alkali plants were the largest source of anthropogenic mercury until the 1980s. Emissions have declined as a result of initiatives to move away from mercury-based processes and plant closures.1 In the 1990s, the mining and smelting industries became the largest contributors of anthropogenic mercury emissions, although emissions have been decreasing since the mid-1990s. As of 2010, electricity generation accounted for 30% of mercury emissions to the atmosphere in Canada.1

FACT: An estimated 200 tonnes of mercury are deposited in the Arctic each year, largely via atmospheric transport. A ten-fold increase in mercury levels in certain Arctic wildlife species has been observed over the past 150 years.2

Mercury is distributed through the environment primarily via atmospheric transport.3 It circulates until it is removed, mostly by rainfall. Because it can be transported long distances in the atmosphere, it is found even in remote areas, including the High Canadian Arctic.3 Transport of mercury can also occur in river sediments and along ocean currents.

Methylmercury, the organometallic form of mercury, is the main form of mercury that is absorbed by fish and wildlife.4 It enters marine food webs via algae and bacteria, and is then transferred to zooplankton, then to benthic invertebrates, and so on up the food chain.4

Methylmercury is the form of mercury that is of greatest concern from a toxicological standpoint.5 Methylmercury biomagnifies (increases in concentration in the tissues of organisms as it moves up the food chain) and distributes into various organs in the body, including the brain. It can also be transferred from mother to young in both mammals and birds.5,6 Its tendency to biomagnify and accumulate in tissues poses potential health risks for top marine predators as well as humans who consume seafood.5

In terms of effects, methylmercury is well known for its neurotoxicity, with more severe symptoms including anorexia, loss of coordination, and eventual death.5 It can also be toxic to the immune, endocrine and reproductive systems.7

On a population level, methylmercury toxicity has been associated with decreased reproductive success in North American common loons, with decreases in productivity of at least 50% in some cases.8,9 Specific effects include reduced clutch sizes, increased rates of embryonic deformity and mortality, and reduced hatching success.5

In Canada, regulations prohibit the manufacture and import of products containing mercury or any of its compounds, with exemptions for essential products that have no viable alternatives.10

Tsleil-Waututh Nation and the British Columbia Ministry of Environment and Climate Change Strategy are collaboratively updating water quality objectives for Burrard Inlet in the Metro Vancouver area. As part of this process, tissue screening values for fish and shellfish protective of human health have been developed for several contaminants of concern, including mercury. These screening values represent a suggested safe level of contaminants in fish tissue. Exceedance of screening levels may indicate that further investigation to assess human health risk is warranted but does not imply risk to human health. 13

5 Scheuhammer A, Braune B, Chan HM, Frouin H, Krey A, Letcher R, Loseto L, Noël M, Ostertag S, Ross P, Wayland M. 2015. Recent progress on our understanding of the biological effects of mercury in fish and wildlife in the Canadian Arctic. Science of the Total Environment 509-510: 91-103.