Sediment and mussels are the two international ‘gold standards’ of marine pollution monitoring. During Phases 1 and 2 of Pollution Tracker, we collected sediment and mussels from 79 sites along the B.C. coast. Samples were sent to specialized laboratories for analysis of over 550 individual contaminants.

Sediment is used around the world to evaluate pollutant inputs to aquatic environments, as it can be both a contaminant ‘sink’ as well as a ‘source’ for adjacent food webs.

Nearshore sediment samples were collected from targeted depths of 10 to 20 m using a Petite Ponar grab aboard a small boat. Depositional areas with fine-grained sediment were targeted for sampling. The top 2-5 cm of sediment was taken from three to five grabs at each site, mixed together, and submitted for laboratory analysis. In Phase 2, sediment was collected from 69 sites coast-wide.

Blue mussels (Mytilus sp.) have been used for several decades to monitor coastal health in the United States and Europe. Mussels are useful for pollutant monitoring because:

Three ‘Tiers’ of analysis were used for sediment and mussel samples, with Tier 3 being the most comprehensive. Tier 3 analysis includes over 550 individual chemicals. The choice of analysis level was contingent on the availability of funding, the interests of partners, and the sampling intensity within a given region. 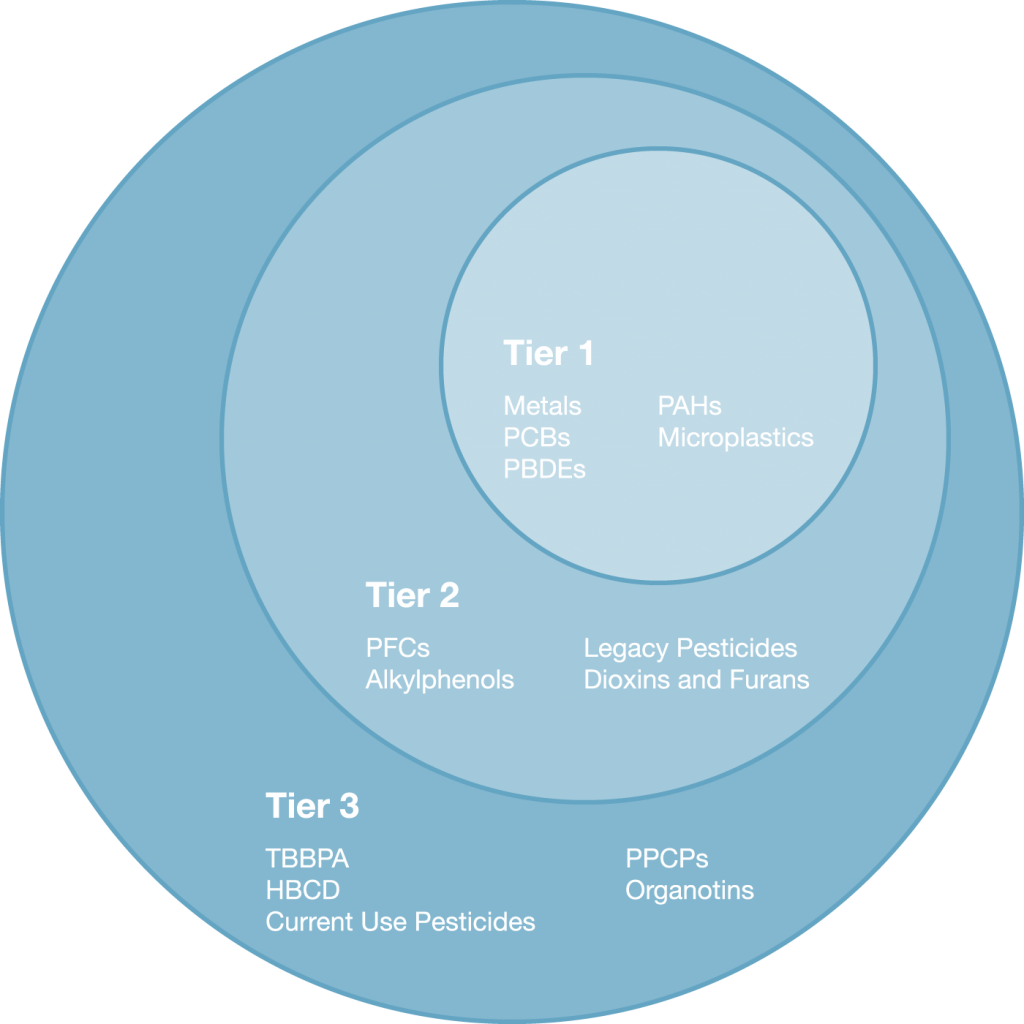 Within all major contaminant classes (e.g., polychlorinated biphenyls [PCBs], polycyclic aromatic hydrocarbons [PAHs], polybrominated diphenylethers [PBDEs], metals, pesticides), multiple individual contaminants were analyzed by the laboratories. For example, 209 individual PCB compounds were analyzed. For ease of presentation, we provide contaminant totals where possible (e.g., total PCBs is the sum of all individual PCBs measured). This approach is typically used for groups of contaminants that are structurally similar, such as PCBs and PAHs. However, legacy pesticides, current use pesticides (CUPs), and pharmaceuticals and personal care products (PPCPs) are also presented as totals in the bar graphs to provide an indication of overall levels. A further breakdown of individual pesticides and PPCPs detected is provided for each bar. We selected three metals of particular concern in the marine environment for presentation (cadmium, lead, and mercury), but other metals were also analyzed.

Phase 2 contaminant levels have been compared to Phase 1 levels for information purposes (shown as arrows in the Phase 2 graph pop-up windows). Comparisons are only shown if a sample was analyzed for a contaminant in both Phase 1 and 2. It is important to note that there are many potential sources of variability associated with these samples, and differences in levels between two time points cannot be attributed to absolute increases or decreases. Collection and measurement of samples over a longer period is necessary to make inferences about trends.

For perfluorinated compounds (PFCs), PPCPs and current use pesticides (CUPs), more compounds were analyzed in Phase 2 than Phase 1. Therefore, total concentrations of these contaminants cannot be compared between phases for all samples. Samples for which total concentrations can be directly compared between Phase 1 and 2 for these contaminants are listed in Table 1a (sediment) and Table 1b (mussels).

Table 1a. Sediment PFCs, PPCPs and CUPs: total levels comparable between Phase 1 and 2 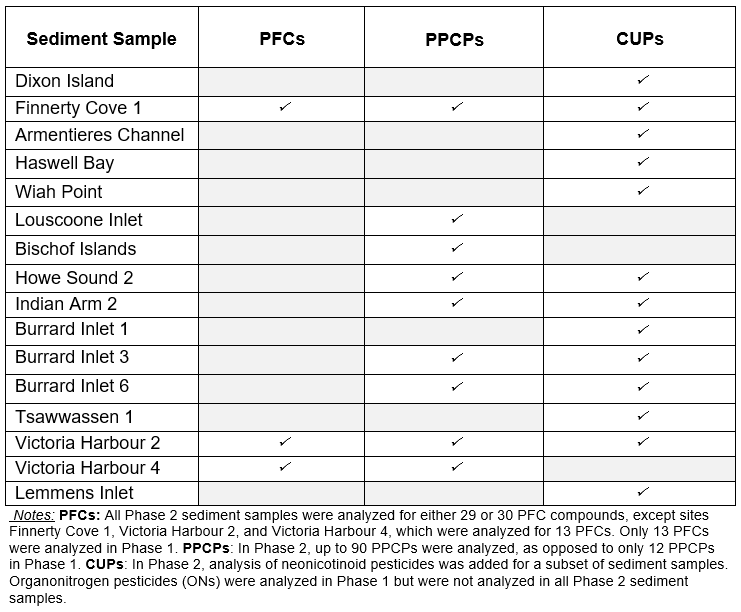 Table 1b. Mussel PFCs, PPCPs and CUPs: total levels comparable between Phase 1 and 2 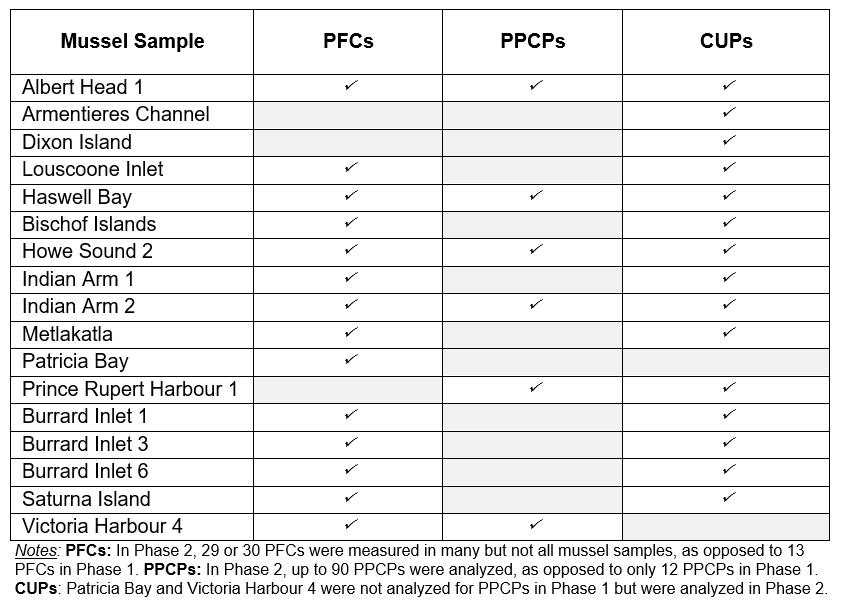 Where available, Federal (Canadian) and Provincial (British Columbia) sediment and tissue quality guidelines protective of marine organisms are indicated on the bar graphs for each contaminant group. The lower ‘Sediment Quality Guideline’ is the concentration below which adverse biological effects are expected to occur rarely. The higher ‘Probable Effects Level’ is the concentration above which adverse biological effects are expected to occur frequently. British Columbia (BC) Working Sediment Quality Guidelines are equivalent to Canadian guidelines for the contaminants shown. It is important to note that sediment quality guidelines are meant to be protective of the whole marine ecosystem, but as these guidelines are largely based on toxicity endpoints for invertebrates, they are not necessarily relevant to higher trophic level organisms (e.g., marine mammals). BC Working Sediment Quality Guidelines protective of killer whales have now been developed for PCBs (0.0037 µg/kg) and PBDEs (1 µg/kg), but these guidelines are not shown on the bar graphs due to scale.

Ranking of sites based on contaminant levels

For each 3-year phase, contaminants measured in sediment and mussels at each site were ranked relative to levels measure at all other sites, where a rank of 1 indicates the most contaminated site. When considering the overall rankings for each site in Phase 2 (averages across all contaminant classes), the three sites ranked as most contaminated were:

As the number of sites sampled differed between Phase 1 and 2, site rankings cannot be directly compared between phases for overall average rankings or for rankings of individual contaminants.