Current use pesticides (CUPs) are a diverse group of chemicals that are currently used in Canada and elsewhere for pest control. They were developed as a result of bans and restrictions on most organochlorine pesticides in the 1970s and 1980s. CUPs were developed to be less persistent.

In British Columbia, CUPs are used mainly in agriculture, forestry, and for urban use.

Which ones were detected?

Alachlor
Aniline herbicide used to control grasses and broad-leafed weeds by interfering with protein synthesis and root growth in plants. In Canada, historically used on corn and soybean crops.
Banned in Canada in 1985 due to its carcinogenic potential and a lower risk alternative (metolachlor).3 Banned in the European Community in 2006. 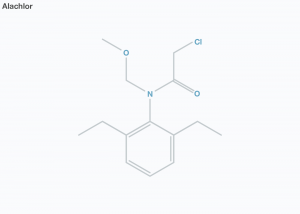 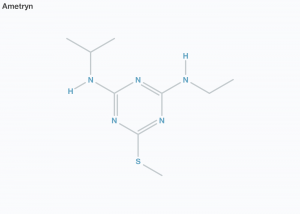 Atrazine
Selective herbicide used to control grass and broadleaf weeds in crops (corn and sorghum in Canada).
Still in use in Canada16 and the United States. Banned in the European Union.

Chlorothalonil
Broad spectrum organochlorine fungicide; wood protectant; insecticide.
Although most organochlorine pesticides have been banned in North America, chlorothalonil is still in use. Restricted use in Canada (under assessment).5

Chlorpyriphos
Broad spectrum organophosphate insecticide that interferes with the nervous system upon contact.
Banned or restricted in many countries but still used in North America.6

Diazinon/Diazinon-oxon
Organophosphate insecticide used to control pest insects in soil, on ornamental plants, and on fruit and vegetable field crops.
Used in Canada.4 Banned for residential indoor and garden use in the U.S., but still approved for agricultural uses.2

Octachlorostyrene
Not a commercial product; produced during incineration and combustion processes involving chlorinated compounds.8
Produced as a byproduct.

Permethrin
Broad-spectrum pyrethroid insecticide used to control pests on crops and home gardens, as well as fleas and ticks on animals, biting flies, and cockroaches.
Used in Canada for wide variety of purposes. Currently under review for specific uses.15 Most frequently used pyrethroid in the United States. 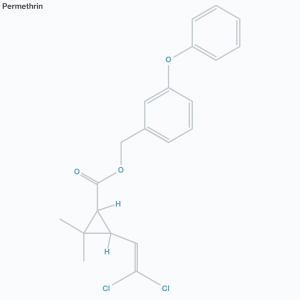 Quintozene (also called pentachloronitrobenzene or PCNB)
Organochlorine fungicide used on crops.
Restricted used in the United States, and still in use in other parts of the world. As of 2015, quintozene is no longer used in Canada.14

Trifluralin
Herbicide to control grasses and broadleaf weeds in a variety of crops.
Used in Canada.6

FACT: Neonicotinoid pesticides (neonics) are the most widely used class of insecticides world-wide. Neonics were not analyzed in Phase 1 PollutionTracker samples because laboratory protocols were not yet optimized for their detection. However, analysis of neonics in sediment is now available, and selected Phase 2 samples will be analyzed for these CUPs. Neonics such as imidacloprid are harmful to non-target terrestrial and aquatic insects. The use of several neonics is currently being reviewed by Health Canada.12

Current use pesticides typically enter the aquatic environment via surface runoff from treated areas, stormwater discharges, groundwater infiltration, and atmospheric deposition. Pesticides may also be applied directly to freshwater aquatic systems intentionally (e.g., for control of mosquito larvae) or unintentionally during aerial application of pesticides to forested and agricultural areas.9

In general, CUPs are more target-specific and less persistent than legacy pesticides, but some CUPs (e.g., organophosphates) are more acutely toxic.10 Given the number and diversity of CUPs, as a group they have the potential to cause adverse effects on a wide range of organisms. Effects observed in non-target organisms include neurotoxicity, disruption of growth and development, suppression of the immune system, interference with kidney function, and disruption of a range of other protein, enzyme, and hormone processes.9

Despite the development of less toxic CUPs, these alternatives are often more expensive and are not as widely used. For example, synthetic pyrethroids are based on natural insecticides from chrysanthemum flowers and were developed as a less toxic alternative to organophosphates. However, they are often not used in poorer regions of the world due to their cost.10

In addition to the inherent toxicity of pesticides while in use, stockpiled pesticides pose an additional risk to human health and the environment world-wide. Stockpiles may hold pesticides that are obsolete due to regulatory bans, or that have expired. Containers may corrode and leak, and chemical by-products that form as pesticides deteriorate can be more toxic than the original products.10

Health Canada controls the import, sale, manufacture, and use of pesticides in Canada. Provincial pesticide regulations further control how pesticides are sold, used, applied, and licensed, and municipal governments may also enact bylaws restricting pesticides use.4

One of the most publicized health concerns associated with CUPs is their detection in drinking water. Canada and other countries have developed drinking water quality guidelines for some of the most frequently detected CUPs. In 2003, the European Union banned the CUP atrazine, one of the world’s most widely used herbicides, due to concerns about contamination of groundwater used for drinking water. However, following assessments, the United States and Canada continue to allow atrazine use.

Under the umbrella of the United Nations, the Rotterdam Convention identifieds hazardous chemicals, including pesticides, that require regulations around their import and export. Member nations, including Canada, must conform with export rules about labeling, safe handling, and identification of any known restrictions or bans, and can decide whether to allow or ban import of these chemicals. Of the CUPs detected in PollutionTracker samples, only alachlor is listed under the Rotterdam Convention.11

10 FAO (Food and Agriculture Organization of the United Nations). 2017. Prevention and Disposal of Obsolete Pesticides. Available at: http://www.fao.org/agriculture/crops/obsolete-pesticides/what-dealing/obs-pes/en/