Organotins are synthetic organometallic compounds that are used primarily as pesticides and stabilizers for polyvinyl chloride (PVC) plastic products (CCME 1999). In the marine environment, organotins are used in antifouling solutions and paints, which are used to prevent the accumulation of barnacles and other fouling organisms on boat hulls, fishing nets, lobster pots, and on the net pens of fish farms. Tributyltin (TBT) and triphenyltin (TPT) are the most toxic organotin compounds.1 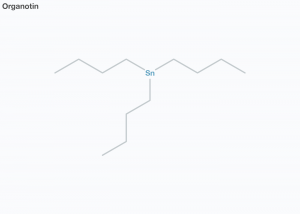 In British Columbia, TBT-based paints used on ships have likely been the largest source of butyltin compounds in the marine environment, and until recently, new inputs from ships and shipyards have occurred. Historically, salmon farms operating in British Columbia also used nets treated with TBT-based antifoulants, but this use was banned in the late 1980s.2 Current sources of organotins include wastewater, industrial wastes, and landfill leachate.

TBT can dissolve in water or stick to organic materials such as bacteria and algae or to sediments, where it can persist for months to years.2,3 However, TBT can move back and forth between sediment and water 3; therefore, TBT-contaminated sediments can act as an ongoing exposure route for aquatic organisms. Marine organisms are known to bioaccumulate TBT, and it biomagnifies (increases in concentration) in marine food chains.2

TBT has toxic effects at all trophic levels. It is a known endocrine disrupter in invertebrates, affecting energy production, survival, growth, metabolism, and reproduction. Molluscs are particularly vulnerable to TBT because it can bioaccumulate in their tissues to levels sufficient to cause endocrine disruption in the form of elevated testosterone levels. This elevation results in a phenomenon known as imposex, which is when females exhibit male sex characteristics. Imposex has affected mollusc populations globally 3, and has been reported throughout the Straits of Georgia and Juan de Fuca in British Columbia.2

FACT: The first record of the harmful effects of tributyltin came from the French Atlantic coast. During the 1970s and 1980s, production at many oyster farms was affected when oysters exhibited severe growth problems, lack of reproduction, and issues with shell calcification.10

TBT exposure can affect the immune and hormone systems of marine mammals 6,7, and has been shown to affect the reproductive system in rodents.1 Liver concentrations measured in sea otters that died due to infectious disease were found to be near or above the threshold levels for immune and liver toxicity in other species, potentially contributing to their susceptibility to infectious disease.8 It has also been hypothesized that TBT may cause hearing impairment in whales and other mammals by affecting the ability of the inner ear’s outer hair cells (which amplify incoming sound) to regulate chloride levels.9 Because many marine mammals rely on echolocation or sonar, the researchers hypothesized that this hearing impairment may contribute to marine mammals being struck by ships and beaching themselves.9

While some organotins are still used in Canada, the use of TBT-based antifouling paints was banned for small vessels (under 25 m length) in 1989, and terminated completely in Canada in 2002. 7 The use of TBT-based paints on ships was banned globally in 2008 by the International Maritime Organization; however, countries that are not signatories to this convention may continue to use antifouling paints containing TBT.1