Polychlorinated biphenyls (PCBs) are industrial chemicals that have been used extensively as stable, heat-resistant oils in electrical transformers, capacitors, and heat exchange fluids, and as additives in paint, carbonless copy paper, and plastics. PCBs were produced commercially in the United States between 1929 and 1977 and imported to Canada. Commercial PCB formulations were sold in North America under the trade name Aroclor. Nine Aroclors were produced, each containing different mixtures of the 209 PCB congeners (or types).1

The import, manufacture, and sale of PCBs was made illegal in Canada and the United States in the late 1970s. In Canada, continued use of older closed electrical equipment containing PCB fluids is permitted until the end of the equipment’s service life.1 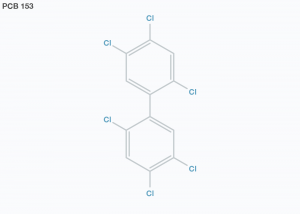 Historically, PCBs entered the marine environment through waste water discharges, contaminated sites, landfill leachate, and incineration. Today, redistribution of PCBs that persist in soil and sediment, and atmospheric transport of PCBs from other areas of the world are the main processes affecting PCB levels in the marine environment.2

FACT: Salmon have been shown to import PCBs from their ocean habitats and deliver them to grizzly bears and freshwater environments.3

PCBs are persistent, remaining in the environment for several decades. PCBs also bioaccumulate in the fats of living organisms and biomagnify (or increase in concentration) up the food chain.

Despite their persistence, PCB concentrations have been declining in environmental media since regulations were put in place. For example, concentrations measured in blubber biopsies from free ranging harbour seal pups in Puget Sound, Washington declined by 81% between 1984 and 2003.5

PCBs pose health risks for marine life. In fish, PCBs cause reproductive failure at relatively low doses. In marine mammals, PCBs have been associated with endocrine disruption, which can cause impairment of reproduction, development, and other hormone-related processes, as well as immunotoxicity, giving rise to increased susceptibility to infectious diseases and cancers.2 In humans, acute exposures to very high PCB concentrations (much higher than typical environmental levels) have been associated with acne-like skin conditions in adults and neurobehavioral and immunological changes in children.1

FACT: Research has shown that the killer whales of the NE Pacific Ocean are among the most PCB-contaminated marine mammals in the world.4

PCBs are a major legacy contaminant of concern in killer whales of the NE Pacific 4,6, and recent research predicts that southern resident killer whales will not be safe from the effects of PCBs until 2063 to 2089. 7

Since PCBs are no longer imported or used to manufacture new materials, clean-up of contaminated sites and appropriate disposal of existing PCBs are key to prevent further marine pollution. In Canada, the storage, handling, transport, and destruction of PCBs are regulated by federal and provincial legislation. Under the Canadian Environmental Protection Act (1999), the PCB Regulations set specific dates for the destruction of PCBs in service and in storage.

It is important to note that most sediment guidelines are largely based on toxicity endpoints for invertebrates and, therefore, are not necessarily relevant to organisms higher up in the food web, such as marine mammals. Regulatory guidelines protective of marine mammals are not yet available for most contaminants but are currently under development in Canada for certain priority chemicals, including PCBs. A Working Sediment Quality Guideline protective of marine mammals was recently adopted by British Columbia (BC), based on the work of Alava et al. (2012) (Table 1).10,11

Table 1. Federal and Provincial Sediment and Tissue Guidelines for PCBs  9,10

Tsleil-Waututh Nation and the British Columbia Ministry of Environment and Climate Change Strategy are collaboratively updating water quality objectives for Burrard Inlet in the Metro Vancouver area. As part of this process, tissue screening values for fish and shellfish protective of human health have been developed for several contaminants of concern, including PCBs. These screening values represent a suggested safe level of contaminants in fish tissue. Exceedance of screening levels may indicate that further investigation to assess human health risk is warranted but does not imply risk to human health.12