Organochlorine pesticides (OCPs) are also known as ‘legacy’ pesticides. Their use was banned or restricted in the 1970s and 1980s in North America and many other countries, yet they persist in the environment today. Beginning in the 1940s, OCPs were widely used in agriculture and for general pest control. Nine of the 12 most hazardous persistent organic pollutants (POPs) targeted by the Stockholm Convention in 2001 for elimination on a global scale are OCPs: dichlorodiphenyltrichloroethane (DDT), dieldrin, aldrin, chlordane, mirex, endrin, heptachlor, hexachlorobenzene, and toxaphene. 1 However, not all countries are signatories to the Stockholm Convention, and use of OCPs continues in some parts of the world. 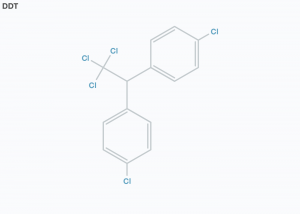 Which ones were detected? 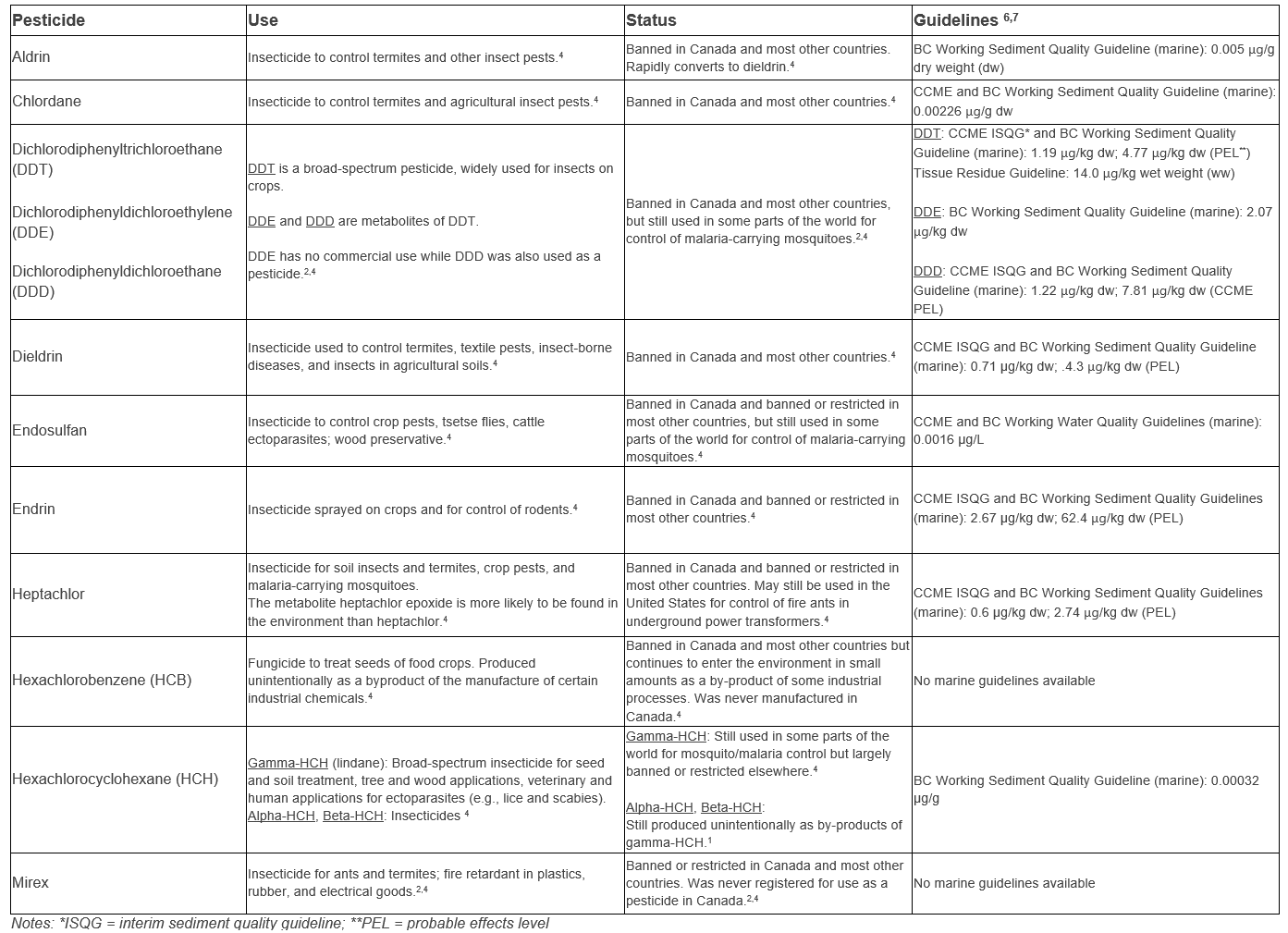 Historically, OCPs entered the marine environment through wastewater discharges and run-off from agricultural lands. Today, where OCPs are banned or heavily restricted, redistribution of OCPs that persist in soil and sediment, and global transport via atmospheric and oceanic currents are the main sources.   OCPs are persistent, remaining in the environment for decades. They are also soluble in lipids, allowing them to accumulate in the fatty tissues of organisms.5

Organochlorine pesticides have a range of toxic effects in humans and other organisms, including damage to reproductive and neurological functions, ability to cause cancer, and hormone disruption.5

FACT: The endocrine-disrupting properties of DDT contributed to a classic case of ‘cause-and-effect’ in wildlife toxicology. Populations of fish-eating birds, including eagles, cormorants and pelicans declined in North America and Europe because of DDT-associated eggshell thinning.3

OCPs such as DDT and lindane are acutely toxic to a wide range of aquatic species. DDT is also highly toxic to bird embryos and can impair egg-shell quality. The reproductive success of bald eagles and other raptors was highly compromised in the 1950s and 1960s partly as a result of DDT exposure. Bald eagle populations began to recover in the 1970s following the ban on DDT in Canada and the United States.5

In salmon, agricultural OCPs have been shown to impair their sense of smell and disrupt their ability to return to their natal streams.5

Organochlorine pesticide use is largely banned in North America, greatly reducing new inputs to the environment. Since OCPs are no longer imported or used in Canada, clean-up of contaminated areas is key to prevent further marine pollution.

Canadian federal 7 and provincial 6 marine sediment quality guidelines protective of marine invertebrates are available for several OCPs (Table 1). However, tissue residue guidelines for the protection of wildlife consumers of aquatic biota are only available for DDT.

On a global scale, the Stockholm Convention aims to eliminate the use of the most toxic OCPs. Reductions in the global use of OCPs will help decrease inputs and adverse human and environmental effects in both source regions and other parts of the world.

Although the use of legacy OCPs is not permitted in Canada today these persistent compounds remain in the environment, and new pesticides have been developed to replace them. Individuals and organizations can: