Lead occurs naturally in the environment as a trace element, and major natural sources include volcanoes and weathering of rocks. Human activities, including mining, smelting, coal combustion, and waste incineration, have greatly increased the distribution and abundance of lead in the environment.1 Lead is also used in the production of batteries, dyes, paints, and metal alloys. Its properties (including high density, low melting point, malleability, and corrosion resistance) have made lead the primary metal used to manufacture ammunition and fishing weights.1 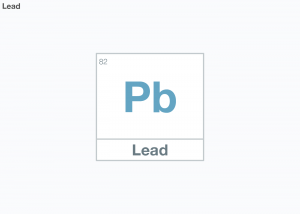 Lead can enter the marine environment through effluent from large-scale mining and lead smelting activities.1 The long range atmospheric transport of lead can also result in its deposition in the marine environment.2 When lead enters aquatic systems, it is deposited in sediments in association with particulate matter; therefore, sediments act as an important exposure route for marine organisms.3

Human exposure to lead results largely from environmental sources such as lead-based paints and contaminated dusts and soils.5 There is no ‘safe’ level of lead exposure in humans.6

In human adults, lead exposure can cause dysfunction in the cardiovascular, reproductive, renal, and central nervous systems.7 It is classified as a probable human carcinogen by the International Agency for Research on Cancer (IARC). In children, lead exposure can cause IQ deficits, ADHD, behavioural challenges, impaired dental health, and delayed sexual maturation.7

Most of the research on lead toxicity in wildlife has been done on birds. Lead poisoning can result in toxicity to kidneys, bones, and the neurological, reproductive, and central nervous systems.1 Specific symptoms include lethargy, anorexia, breast-muscle atrophy, loss of strength and coordination, drooping wings, and changes in vocalization.1

In the Pacific Ocean, there is a decommissioned military base on Midway Atoll, which has become a significant source of lead in the form of lead-based paint. The ingestion of lead-based paint chips by Laysan albatross chicks resulted in ‘droopwing’ (a symptom of neurotoxicity) and mortality.5

There is much less information regarding the toxicity of lead to marine mammals. In one example, a stranded female harbour seal died despite rehabilitation attempts. A necropsy revealed a lead fishing sinker in her stomach, and changes to the brain, heart, kidney, liver, lymph nodes, and spleen indicated acute lead toxicosis. This was the first documented case of lead toxicosis in a wild marine mammal.8

FACT: The first documented case of lead toxicosis in a wild marine mammal occurred in northern California in 2004. An adult harbour seal died after ingesting a lead fishing sinker.8

Wildlife exposed to lead can also experience toxicity to the immune and neurological systems without showing any obvious signs of dysfunction. In one study, herring gull hatchlings experienced neurological toxicity resulting from lead exposure during early development, and the authors suggested that these impairments may compromise the ability of chicks to survive in the wild.9

The use of lead in products, including paint and gasoline, has been banned in many countries, including Canada and the United States.10,11 Many countries, including Canada, have banned the use of lead shot for waterfowl hunting.12 However, only Sweden and Denmark have banned lead ammunition for all forms of hunting. Denmark has also banned all lead fishing tackle (as of 2002), and lead tackle has been banned in the United Kingdom since 1987. In Canada, it is illegal to use lead fishing tackle weighing less than 50 grams in National Parks and National Wildlife Areas.14 In the United States, individual parks and refuges make decisions about the use of lead fishing gear.

Canadian marine sediment quality guidelines for lead are available (Table 1); however, these guidelines are derived from toxicity endpoints in benthic invertebrates and, therefore, are not protective of birds and marine mammals.

Tsleil-Waututh Nation and the British Columbia Ministry of Environment and Climate Change Strategy are collaboratively updating water quality objectives for Burrard Inlet in the Metro Vancouver area. As part of this process, tissue screening values for fish and shellfish protective of human health have been developed for several contaminants of concern, including lead. These screening values represent a suggested safe level of contaminants in fish tissue. Exceedance of screening levels may indicate that further investigation to assess human health risk is warranted but does not imply risk to human health.16