Hexabromocyclododecane (HBCD) is a brominated flame retardant, used primarily in polystyrene foams for thermal insulation in the construction industry. HBCD is also used as a flame retardant on upholsteries, wall coverings, and draperies.1 HBCD is not known to be manufactured in Canada, but is still in use. 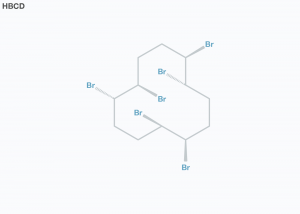 The major pathways by which brominated flame retardants enter the marine environment are likely landfill runoff and leaching from finished products into wastewater systems.

Brominated flame retardants as a group are known to have toxic effects to immune, thyroid, reproductive, and neurological systems in terrestrial and aquatic organisms.7,8

In rats, HBCD exposure has been shown to cause increases in liver weight and changes to the thyroid system 9, while in mice, HBCD exposure caused developmental neurotoxicity.10

FACT: HBCD concentrations increased exponentially in the eggs of rhinoceros auklets, Leach’s storm-petrels, and ancient murrelets between 1990 and 2011.6 Low levels of HBCD were also detected in the eggs of cormorants and herons in British Columbia starting in 2003.3

Canadian federal environmental quality guidelines (FEQGs) have been developed for HBCD in water and sediment.12

3 Miller A, Elliott JE, Elliott KH, Guigueno MF, Wilson LK, Lee S, Idrissi A. 2015. Brominated flame retardant trends in aquatic birds from the Salish Sea region of the west coast of North America, including a mini-review of recent trends in marine and estuarine birds. Science of the Total Environment 502: 60-69.